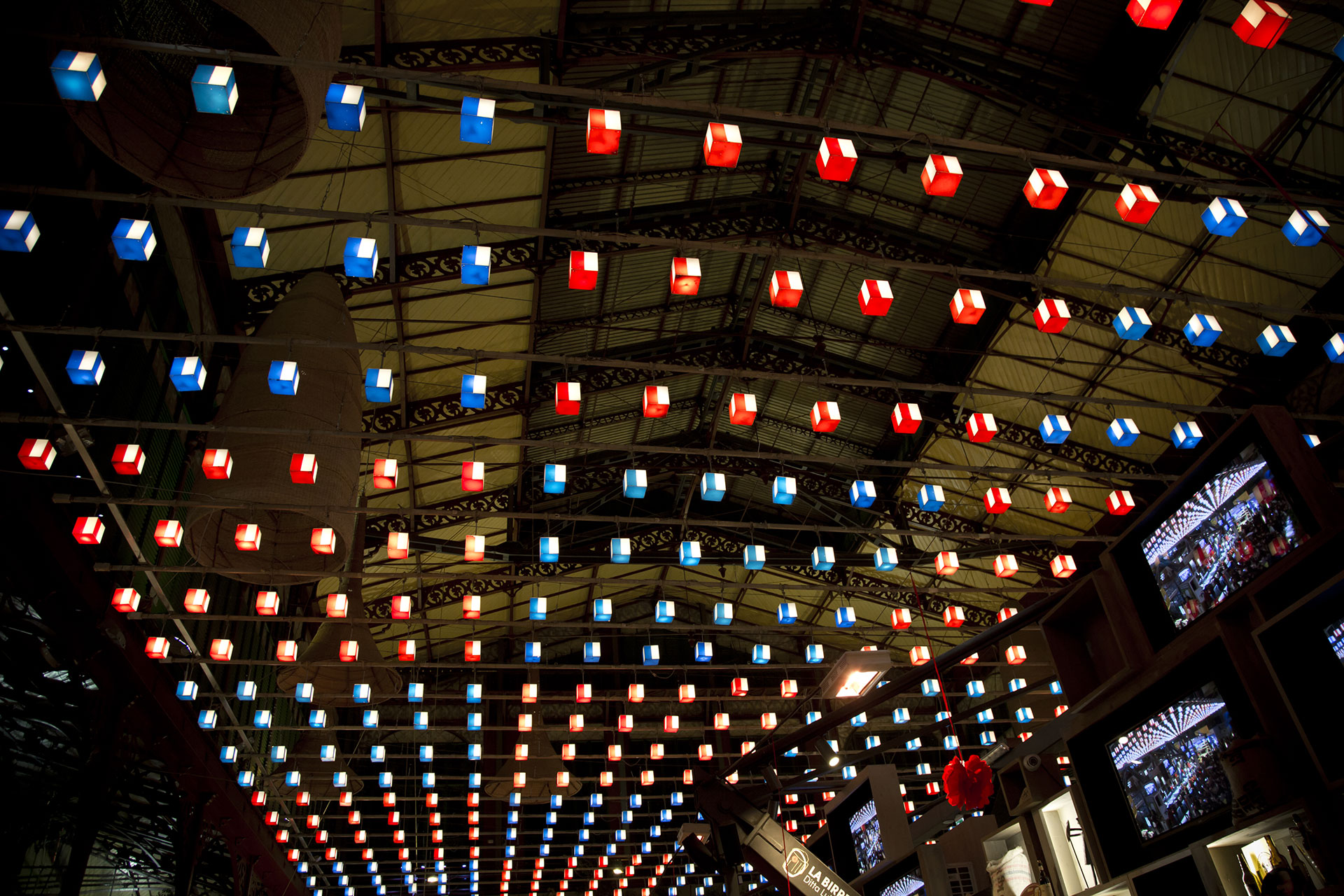 “The market is a place of exchange par excellence and our Mercato is a piazza that encourages a virtuous blend of intellectual activities and people with “good taste”. The market is thus the perfect host for art and rapports, knowledge and food; it’s the epicentre of a myriad of interests. These are some of the Mercato Centrale Firenze’s strengths, a key source of its charm and demonstrated by the millions of visitors we’ve welcomed since opening seven months ago. This success is tied to the local community, so we feel that we must give back, a duty that, in my opinion, should be shared by every company. Bringing Daniel Buren’s Flying Carpet to Florence is the first act of giving back that the Mercato Centrale Firenze wants to offer its city, while wishing everyone a most wonderful Christmas.”

FLYING CARPET by BUREN
THE ARTIST IN SHORT

Daniel Buren is one of the most important French contemporary artists. Since the 1960s, Buren has worked in situ, designing and creating works meant for a specific space and public, and has always made use of a “visual element” for his pieces. He’s one of the founders of the French art group BMPT, which he was part of between 1966 and 1967. During this period, his projects were minimalist and conceptual in nature, namely his alternating white and coloured bands, each the same width, that he applied to different supports and contexts. In 1986, he judged the Golden Lion for the best pavilion at the Venice Biennale. He later began to develop a more three-dimensional style and a conception of the work as a variation of the space rather than an object, underlining the interdependence between work and place. In his most recent works, colour is no longer just applied to walls but literally “installed in the space” in the form of filters, sheets of glass or coloured Plexiglas.

THE WORK IN SHORT Flying Carpet, 1999

This work was designed by Buren specifically for “Luci d’Artista,” a project by the city of Turin, and is a contemporary outdoor installation made using light.
Visible both day and night, the work showcases a strict range of colours: white, red and blue (which are also the colours of the French flag). At night, the cubes light up like Chinese lanterns and Buren’s creation transforms into a “flying carpet” suspended mid-air. For the 2005-06 edition, staged during the Winter Olympics in Turin, “Luci d’Artista” featured Flying Carpet with an Italian twist, paying tribute to the country’s flag by replacing the colour blue with green. Made in 1999 for “Luci d’Artista,” a project by the city of Turin featuring contemporary outdoor installations made using light, Flying Carpet was loaned to the City of Florence and the Mercato Centrale Firenze, who will host the work until the end of March. The installation comprises 1,344 lamps made with coloured Plexiglas cubes whose sides alternate between white & red and white & blue, suspended in perfect alignment forming a bright carpet. The lamps are suspended across 32 rows of steel ropes 6 mm in diameter and 114 cm apart. The chains are fixed in place with support tubes 114 cm apart that run parallel to the exterior of the illuminated plane and anchored to the building’s load-bearing structure.
Stay rods 3 mm in diameter and 200 cm apart are suspended from the steel ropes; the rods vary in length so as to account for the curve of the ropes, guaranteeing perfect alignment of the electrical ducts supporting and lighting the single cubes. The ducts are connected to each other in order to ensure they are parallel with the 6 aluminium extrusions 40 x 30 mm in size that run longitudinally to the entire length of the work. The lamps are divided into 4 x 6 groups, determined according to their colour and comprising 24 cubes. There are 7 transversal groups and 8 longitudinal, for a total of 56. The transversal space between the lamps is 70 cm, while the longitudinal distance is 114 cm. Every cube is equipped with a small steel cable that directly connects it to the load-bearing duct, providing an extra safety measure to protect against the risk of the work falling. A key factor in the work’s success is the perfect alignment of the electrical ducts and, as a result, the perfect equidistance between the individual cubes and the uniform rotation of the cubes, whose adjacent sides must be perfectly parallel. Looking at the work diagonally bluntly reveals every defect of this alignment, stripping the work of its magic, just as Daniel Buren wanted.

X
This site uses technical, profiling and third-party cookies. To manage or disable cookies please read the complete privacy policy.
By closing this banner, scrolling through the page, clicking on a link or continuing to browse the site, you agree to our use of cookies.